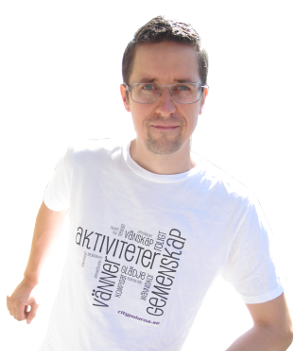 When I sold my car, the car dealer wrote down the information about the car in a large notebook. It was filled with cars, some sold, removed with a line across and the rest still open for sale. It must have been tedious to go back and find some of the older cars that had not been sold. But the real problem was that there were a sales team of three, and only one book.
So I offered to build a web based application, so that all the sales people could access it at the same time. Showing only available cars and an advanced search function. Within a couple of weeks I was told that they now had manage to sell a cheap car that basically covered the expense of the entire application. Just because they sold a car they never would have bothered to go look for in the book. They also realised that they had some cars to sell that was not registered in the book.
Since then I have developed modules for tracking tires, sales orders, invoices, service, exchange car and many more. But the best thing, says the car dealer, is that now he can sell a car from home or even when he is on vacation and he always knows what is going on in his business.

Since I was a kid I have been playing business. I wanted to start a company, and I have always had a fascination for computers. Even before I knew they existed. I even tried to make a game console out of my fathers old typewriter. My business ideas were about repairing bicycles or starting a band. But it was not until after I've gotten my exam as a computer engineer. And the IT bubble bursted forcing me to worked as a teacher for two years, that I started my own business. But the market was still cold. So it did not go to well and after 6 months I had to shut it down.
But I have not given up hope because even though I work as a full time employed IT-consultant at FrontIoT I still run a small hobby business in the evenings called CityPolarna.se. And my employer gives me so much freedom, it almost feels like I have my own business and 2019 I became a partner in the firm.

As a kid I loved to run around in the forest, building tree houses and exploring the woods where we lived. As I grew older I picked up the guitar but when I had my first encounter with a programming language I got hooked. In Chipmunk Basic on Mac, I wrote a worm game to play and a glossary test to rehears my self in English. Then I started encounter new languages like Pascal, Assembler and C++. And they were all exiting. I learned how to put colorful pixels on the screen, then I arranged them in beautiful moving patterns. Like the old screen savers on windows 95. In high school I picked up the guitar again and started a band, but I also played in the student theatre. Both in the orchestra as well as on stage. That was the beginning of a list of 6 or 7 acting performances in different theatre plays.
Today my main focus is business development, both my own and my clients. I spend my spare time exploring the world of marketing, sales, design and much more. This is something that I'm really passionate about and if you want to exchange your thoughts on these topics you are more then welcome to connect.